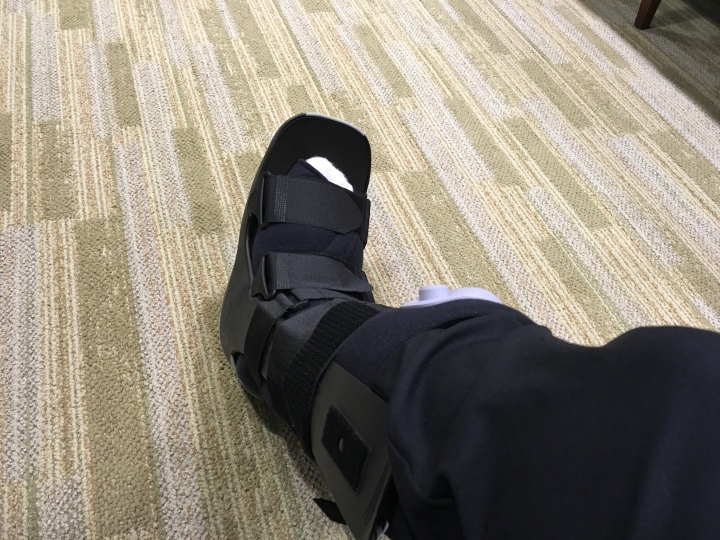 I fell down the stairs about a month ago. I don’t know what I tripped on, because there was nothing there. Granted, my children love to just toss things down the stairs instead of walking down the stairs. We have an unfinished basement, so most of the time no one goes down there, just for laundry, the pool table (which is presently covered in assorted treasures), and my youngest basketball pop-a-shot. So, the most likely thing you’ll come across is laundry dirty clothes on the stairs. Just a few days before that, there was a sign on the door stating they weren’t to throw the laundry down the stairs, but to walk it down and put it in the laundry room. The sign must have come off, and evidently, if it’s not posted anymore, the same rules don’t apply. Sigh.

I was on my way down the stairs and I was carefully removing the laundry on the next step before stepping down. I know there wasn’t any laundry on the particular culprit stair because I had successfully kicked it not just to the next stair down but about 3-4 stairs down on the landing. Yay! Stepped down and boom boom crack boom. That’s me. The sound of me falling down about 4 stairs. Pain and fear instantly enter my mind. Fuck, damnit, shit! Oh crap, did I break my foot!? I felt that crack, I must have. Oh no! What does this mean for chemo?! Will I have to delay treatment? Fuck! If I delay treatment will I die?! Oh god, I’m gonna die because I fell down the stairs! Oh shit it hurts! Yes, half of this was in my brain, the cussing was out loud as well as my panicked tearing up in my eyes. I was stuck. No one was home. The boys had just left for school and my husband was at work and I don’t have a phone on me. Well, I’m gonna have to move my ass. I can’t stay here waiting for a rescue.

I inched my way up the stairs on my hands and knees and crawled over to the living room trying to find a phone. I see a cane I had recently acquired from my mother in law to give to my dad. Oooh! That might help. I somehow get up with the help of the cane and hobble around looking for a phone. I can’t put any pressure on my foot. It’s searing with pain. Truthfully I don’t remember how I got a phone but I do remember I made it to my bed and called my mom. It took me a while to get there and I had to try to compose myself in order to call my mom and not freak her out. I call her and try to suppress the panic. I tell her what happened and asked if she can come get me and take me to the emergency room. She says sure she’ll come as soon as she can. I then try to calmly call my husband. I reassure him my mom will come and take me as soon as she can and that he doesn’t need to leave.

The emergency room only took x-days of course, and I ended up going home on crutches, but was told I did not have a broken bone. I was surprised, but relieved. The worst case scenario is if it had been so broken they would have had to do a surgery which would have put off my treatments for sure, or if I chose to ignore the foot, I would have some awful issue where they’d have to rebreak it in the future. Eek. So, I was happy to not have a broken foot.

Crutches don’t work if you are alone half the day. You can’t go get water and carry it from the kitchen to, well, anywhere. Food, same thing. You need two hands for crutches taken, and since I only have two hands, I found myself trying to use one crutch instead of two. This doesn’t work well for the foot or for my armpit.

I ended up seeing my primary the next week about my foot, and she said she was still convinced that I had a broken 5th metatarsal. She ordered an mri, and I scheduled it for later that week.

The day of my mri, I woke up with some pain in the neck. Lol. No, really, I had pain, not in the back of my neck, but closer to my jaw bone. Strange spot. Oh well, on with my day. My mom came and picked me up and I got my MRI done. When I arrived home, I found my neck was hurting worse and I mentioned it to my mom, who stayed for lunch. She mentioned it looked swollen and brought it to my attention that it was on the same side as my port. This hasn’t dawned on me and I wondered if there was a connection. I decided to see if Dr. Google had anything on the subject, and sure enough, blood clots came up.

I tell my mom and we decide to go to the emergency room again! Yay! The Dr. immediately verbally wonders out loud if it isn’t a metastasis. Nice! Hadn’t thought of that. I mention a blood clot, which he dismisses because my face isn’t swollen. He runs blood tests and orders a cat scan. Hours later, he comes back in and says I must be smarter than him because it is a blood clot in my internal jugular.

I’m sure glad I went to the emergency room. He discusses the treatment with my oncologist team at Northwestern and they decided I need to take a blood thinner that I need to inject into my stomach every 12 hours. Yay! That is super fun let me tell ya.

My foot MRI ended up saying I had a bone contusion on my cuboid. Essentially, the inner part of my bone got damaged, but not the hard outer bone. I’m in a walking boot for a month or more. Likely more since chemo likes to make things heal very slowly. My foot dr. has emphasized that if I do not commit to the walking boot, that it can cause a spiral fracture which will then need to be put in a hard cast. Hard cast equals crutches. Considering I have my radical mastectomy in two weeks (including removing all lymph nodes in armpit) followed by 6 weeks of radiation, (also in my armpit)…..the threat had been noted, I will behave with the boot. The damned boot.

Oh, and my youngest broke his arm. He was being pushed a hammock and slid right off. Put his arms down and his left arm musta hit the ground just the right way. He’s in a hard cast for a month.

Stupid bodies. Why can’t they just be made of rubber?